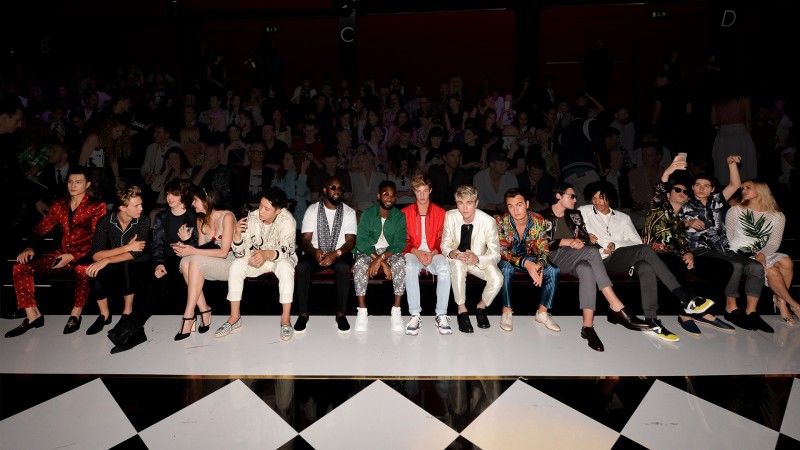 While sipping caffé in Capri Sig. Dolce and Sig. Gabbana had an idea of a brilliant yet equally mindboggling campaign for SS17, #DGMillennials. Last month this campaign took centre stage in Milan for the Dolce & Gabbana Tropico Italiano collection, where the front row was filled with, you guessed it, the millennials of Hollywood. Sorry, Anna Wintour.

#DGMillennials goes far beyond using the millennials for their cute faces, beginning on the runway and ending on the photoshoot. Dolce and Gabbana decided to be radicals and partner with these influential millennials. From where I stand, it’s a win-win partnership, the monetary benefit does not hurt either.

Millennials are often boxed in the perfect and charming box labelled ‘The radicals are still young; they don’t know the real world.’ They are frequently limited by the orthodox belief that ‘one must do what was done before, how it was done and nothing else.’ What the constraints of this fail to show is millennials are diverse, inclusive and hold the power in the palm of their hands. All that is seen from millennials are two things: laziness and selfishness. But, there’s always a but, this can be capitalized on with a touch of innovation here and there; and a dash or sprinkle of me-factor.

The #DGMillennials come from all sorts of lineages and backgrounds but the one thing they all have in common is their mark. Where the mark comes doesn’t matter, what matters is that the mark has an influence, the mark leaves an imprint on the digital world. Let’s get one thing straight, social media for millennials is the stage where they direct, where they have a say. On social media, the #DGMillennials are trailblazers and trendsetters. If Orange is the New Black then Instagram is the New Hollywood – for all millennials.

Dolce & Gabbana saw beyond the limits placed on the millennials. They saw the 3R’s of millennial success. Right there on Instagram.

For a lack of a better word, their influence reaches the corners of Instagram from semi Instagram celebrity to your typical girl next door, who doesn’t know the current exchange but will deliver a PowerPoint on Cameron Dallas.

#DGMillennials are risky. When they post one photo it has the reach of hundreds of thousands and more. They risk being shunned and losing their influence and whatever comes with it. But they do it day in and day out.

The #DGMillennials have undeterred resolve to be the game changers, to be better and do it better than yesterday. All you have to do is see their Instagram.

Still finding the campaign stupendous? Let me wrap it up, #DGMillennials can sensationalise anything; and therein lies their power. The power of sensation. Truth is one of them could wear a rag with a Givenchy watch and some rad leather jacket; a day later it’s a trend. That’s the kind of power and influence they have.

What Dolce & Gabbana is trying to imbue is millennials are not the stereotype, they are not the charming box the world has fit them in. They are a generation of changers, shakers and movers. Meet them halfway and together you can soar into the ever-evolving world.